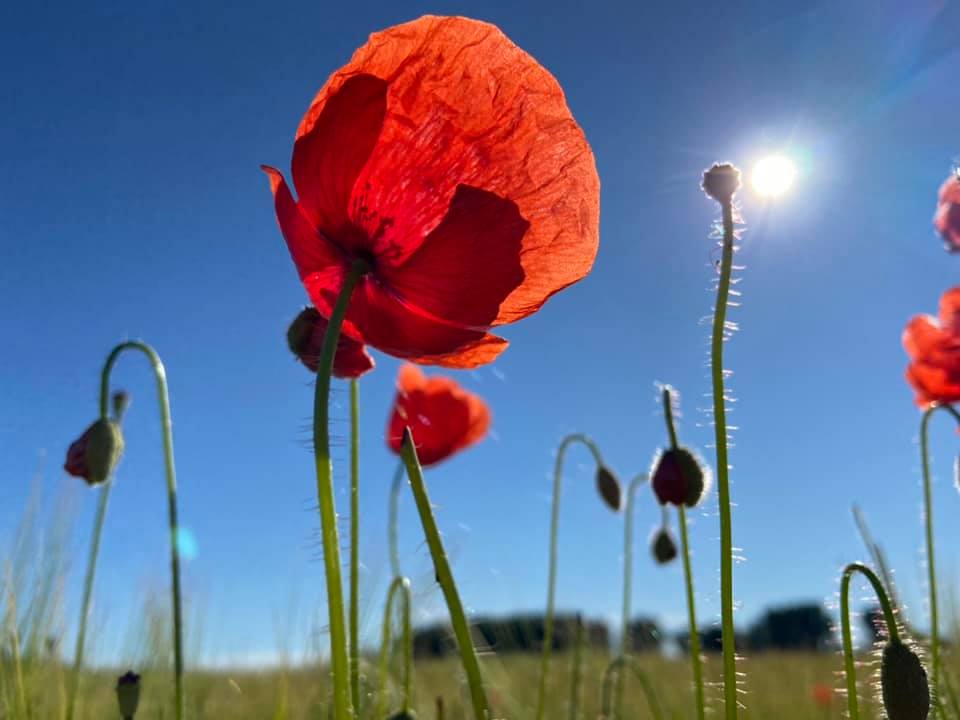 Today I went cycling ad look what I have spotted on!

I know that Summer is coming when I see them.

Green wheat fields full of Red poppies or papaver rhoeas.This red beaties are real stunner. They are wild ones, keeps getting back every summer, and yes, it´s not the same without them. When I cycle around, I can´t help but to stop by and look at them. The closer, the better.I just love how they swing with the warm summer breeze and their red petals so translucent from the sun.

At first I thought they are just weeds. They just pop up everywhere and nobody wants to pay attention to them.But not me.

There is such a notable character to these common Red Poppy. For me whenever I see them, I am amazed just how resilient they are. They grew almost everywhere here in Germany. In the side of the streets, on an empty fields, near the garage, in pots , in perennial gardens, and yes, it´s as tough as weeds.Probably they are the twin sister of Dandelions.

Red poppies contains the alkaloid called rhoeadine, which is a mild sedative.It´s interesting to know that Red Poppies symbolizes the lives of the people who died in Military service.They are often made into wreaths and put unto the graves of the people who lost their lives during the war, especially, for the veteran´s lapels.It symbolises eternity, a continuity of the cycle of life.

In the ancient times,  poppies have long been used as a symbol of sleep, peace, and death.  In both Greek and Roman myths, poppies were used as offerings to the dead. Poppies were also used as emblems on tombstones to symbolize eternal sleep.

After all, opium is extracted from poppies and used as a sedative. Therefore, the added appeal of its use to represent eternal sleep prevails.

Do you love Poppies?

Cee´s Flower of the Day is a fun challenge to do. See you once again my next Flower adventure.

Stay safe and be kind to all.Tschüss.