I often asked our office janitor why he doesn’t clean the windows. He replied : ” Its no use, it will be dusty again tomorrow “. It makes sense, right?

One word to describe Kuwait is Sandstorms (also known in Arabic as Shamal ).  Its plural because they come more often especially during Summer. After years of living here, I realized that its not only on the culture aspect an Expat get a shock, but also on the weather. If you are an Expat in Kuwait I am sure you know what I’m talking about. 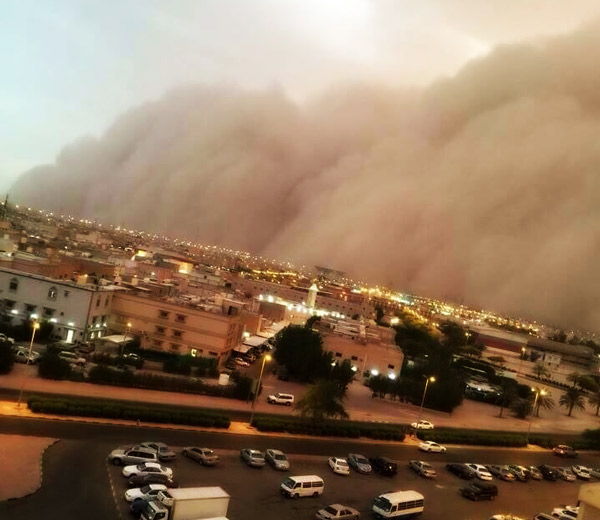 “A huge ‘wall of sand’ engulfs a city in Kuwait. This type of sandstorm is also known as ‘haboob’, derived from the Arabic word for ‘strong wind’ (Photo Credit: Rizalde Cayanan)”

The weather in Kuwait is arid, dust is part of the air you breathe when its dusty, literally. This is the practical & functional reasons why Arab men wear Ghutra & Dishdasha and women wore Niqab, Burqa, Hijab & Abayas. These type of clothing serves as protection from the harsh winds, dust & heat. The weather is totally extreme. When its hot, its really HOT. And when its dry winter, temperatures during this time could reach 0° C. The highest ever temperature recorded in Kuwait was 53.8 °C (128.8 °F) at Sulaibiya on July 31, 2012 which is the highest recorded temperature in Asia and also the third highest in the world. Try to imagine how people deal with this heat during Ramadan.

My first experience of Sandstorm is still very vivid. I was at work when it happened. It was already a bit dusty and windy but around 7am the sky slowly turning into grey, into dark brown, into light orange, and suddenly it was really dark. I could hear the loud sound of the wind gushing through the windows & banging in the doors. I couldn’t see anything from the large window in my office.  I don’t have a smartphone yet during that time so I wasn’t able to capture it . It lasted for a few minutes and gradually it started to clear again. The dusty weather lasted for about 3-4 days. In some cases, it could last longer. Throughout the day, its dusty so everywhere in the building is dusty. I remember one time that while we are on the road, we cannot see further and the cars need to stop. I felt different emotions during those times. I felt sick, suffocated, surprised, amazed and yet excited to see all of these happening before my eyes. It was all new to me.

But then I get used to it eventually through the years. When I noticed from the window that its dusty, I brought an extra scarf and I have mask when going to work. I have learned to accept that it’s part of life here. When its dusty weather, you can’t enjoy outdoors. You cancel your plans. Nobody wants to walk outside while its raining dust. It could drain you physically as well as its not healthy to expose yourself into it. The funny thing is, its very common that its dusty on weekends, I don’t know why.

Here’s an interesting piece about Sandstorms in Kuwait.

This photo was  taken in Kuwait during sandstorm &  was shortlisted from over 10,000 entries for the competition, Environmental Photographer of the Year award. For us who are used to this view, this view is quite normal  but to the majority of the world it looks exceptional and scary. In total , they have 111 photos that have been selected and they all tell a unique story. There’s a website just for this award you can check out [here].

Just in case you have plans to move to Kuwait, make sure you have a decent bandana, scarf or mask in your luggage. You will need it. When you arrive in Kuwait between April ~October, I tell you, it is HOT. You will already be sweating once you reached the carpark so make sure you dress light.

How about you, Do you have any weather shock story ?

8 thoughts on “A Sandstorm experience in Kuwait”