Bavaria, my second home here in Europe,  is a region in Germany where holidays from work is plentiful. I mean, here, I have heard of holidays which I’ve never heard before , like for example yesterday was “Maria himmelfahrt“ ( or the Feast of the Assumption Day of Mary ) . So we decided to take another  trip and extend our nomadic bearings in exploring the Romantic roads and historical cities of Bavaria. This time, we chose Germany’s (another) UNESCO World Heritage site, the fascinating city of Regensburg, the medieval city of northernmost town in Italy.

A little something about Regensburg

Before I don’t know anything about Regensburg, nothing at all. So when we tour this city, I was really surprised at how fascinating it is. My personal impression : Regensburg is beautiful, and has its own charm to be proud of.

But let yourself be warned, it is also very touristy and expensive. Most of the attractions can only be accessed with tours and entrance fees are high compared to other places we’ve been to.

For the record, Regensburg is the largest Medieval city in Germany. With two thousand years of thrilling history meets lifestyle on the Danube. It is one of the few cities in Germany which were spared from heavy bombings from WWII. Regensburg has 1,500 listed buildings; 984 of them make up the UNESCO World Heritage ‘Old Town with Stadtamhof’ ensemble.

Regensburg , a city that lies along the beautiful Danube ( or Donau) river was an important reloading point on the continental trade routes to Italy, Bohemia, Czech Republic and Russia.

Regensburg is a colorful city. I love colors and art so this city is really gives me a very charming atmosphere. Almost all of the important landmarks of the city are within walking distance so its easy to navigate. Although I don’t consider myself as a tourist here, I was intimidated with the massive amount of tourist that I saw. Compared to Nuremberg, the tourists flocked like birds, they are everywhere. There are plenty of ‘Tuscan style’ of the pastel coloured patrician’s houses which makes it really unique from other cities we’ve visited. The small, narrow streets contains so much detail which you can see from the windows, railings, and doors.

Regensburg’s Old Town is an exceptional testament to the cultural traditions in the Holy Roman Empire and Christianity. In the inner city  alone, it has 46 churches.There are churches of different denomination in almost every corner we go. It has small, narrow alleys which leads one to the other and I find the traffic build-up rather annoying . We were exploring the city with a stroller so I find it hard to push the stroller on almost gut-end of the curb of the streets, add the hassle of the cobbled-stone pavements. Nevertheless, as same as in most parts of Germany, drivers are polite and always giving way to pedestrians.

What to see in Regensburg

Oh Regensburg has a lot to offer for all ages, especially for families! Be it for leisure, fun, adventure or a simple getaway from another city, this city is never a dull one.

Your eyes will feast on so many different kinds of beautiful architecture, monumental buildings, museums, churches, and the views that surrounds the city. If you are a lover of art, there are plenty of museums to visit. We skipped this part because my daughter can’t stand the long hours contained indoors in Museums and tours. Here are some of the highlights of our trip which I think you shouldn’t miss if you are planning to visit this city.

The panoramic view of the city with the large stone bridge dating from post-Roman times is completely a postcard-worth for photography! It is an impressive bridge , which were once considered as “The Eighth Wonder of the World”.This medieval monument has served as a model for many other bridges, including Charles Bridge in Prague.

Built between  1135 to 1146,with its original length of 350 meters, and 7 meters wide, with its fortifications with three towers.For more than 800 years, it was the only stone bridge over the Danube from Ulm to Vienna. Emperor Friedrich Barbarossa launched the Third Crusade from here in May 1189.

The views from the bridge and from its foot are really great. The view of the Danube over the Stone Bridge is a magical one and the view of the city’s skyline with its orange and rust colored-roofs is so impressive. I think this is the best landmark of this city. The only thing that bothers me is that a large part of the bridge was undergoing a restoration so half of it was covered in scaffolding so yes, the perfect shot that I wanted to make was unfortunately not possible.Nevertheless, I find it really impressive.

The Old town of Regensburg is a maze of wonder, every alley has its own twists and turns, own charm and yes, it is quite a challenge to discover them one by one. Best way to explore them is by foot since streets are narrow and there are plenty of attractions for sightseeing. There are numerous squares and cafes for a pit stop and place to rest. I saw a lot of details in the rows of buildings, houses and shops. The best way to describe the  charm of Regensburg’s Old Town is through photos. You need to experience it for yourself.

Since I moved to Germany, I have seen beautiful Cathedrals, and this one is no exception. At the heart of Krautermarkt square, you can’t miss St, Peter’s Cathedral.The exterior itself is already impressive and the twin towers are the best landmark of the city. Wherever you go, you always see the towers dominating the skyline.  This cathedral is famous for its ‘Sailer Chapel”, “St. Peter’s Window”, the “Smiling  Angel ” and its complicated , striking and yet  legendary Gothic vaulting. Big part of the Dom is undergoing restoration and during our visit, the front grounds is being prepared for the finishing program for a Triathlon race event (Challenge Regensburg) , so I find it rather in chaotic mode with so many boulders in front. Visitors with kids in stroller and wheelchairs can access the cathedral by way of the close ( Domgarten) to the north side of the Cathedral.There are guided tours ( 6 Euros) to access the cloisters, chapel of all Saints and St. Stephen but only in German.

I love the intricate detail of this 13th century old Town Hall ( or Altes Rathaus) which consists of the Town Hall tower, the Gothic Imperial Chamber building and the baroque Town Hall. From 1663 to 1806 the Reichstag Imperial Assembly met in the Imperial Chamber. It was there that the well-known expressions “to put something on the long bench” (to postpone something) and “to sit at the green table” (to take important decisions) originated.

Notable in this place is the imperial assembly hall and the torture chamber in the cellar where persons charged with an offense were “questioned”.This place can be accessed only with guided tour.Down the town hall is the Tourist Information Center where you can get any information you need to explore Regensburg. 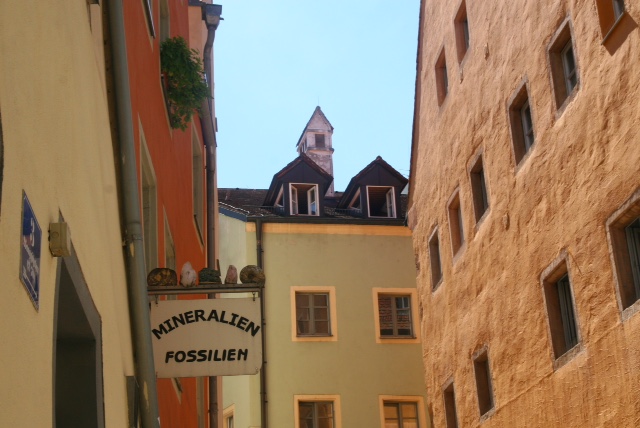 We discovered this Palace by chance when we are looking for a playground. It is very huge. More like a version of the Buckingham Palace. The palace gardens are of private property , including the Prince of Thurn und Taxis Museums, their own Brewery– the Brauhaus am Schloss, the Cloister of St. Emmeram. I admit that when I saw the explicit and grand Carriage Museum and Princely Treasury, I was totally in awe how rich this family is. The name of the noble house of Thurn und Taxis is closely bound to the postal history of Europe.The family, which originally came from Cornello,near Bergamo in Northern Italy built up a postal system in the 15th century.For over 350 years, Thurn und Taxis managed the postal affairs in Central Europe.

Not as impressive as the Porta Nigra in Trier, but if you love Roman architecture, then you are in luck. This hidden gem which shows the ruins and old Roman gate built without using a mortar. The twin arches served as a city gate until the 17th century. The parts that remain are the western arch, a section of the wall connected to the western tower, and the two-story eastern tower. The shaped stones were built-in layers without using mortar. The Porta Nigra, Trier’s northern city gate, was built at the same time, and the two are the only remaining Roman gates north of the Alps. For the record, Porta Praetoria gains significance as the only remaining gate of a Roman military camp in northern Europe.

There’s so much more to see and to write about Regensburg, even my photos won’t do justice. All I know is that I can sit there in the dock of the Danube for hours, watching the ship, cruise, and boats take the toll of time. Feeling the wind in my face, smelling history as I looked at the skyline and watch the hustle and bustle of people, roaming around, paddling the waves of curiosity.

Every cobble stone is patched to create a mosaic of  rough patterns, transforming the movements of the locals and visitors into a myriad of tales, photographs, stories, and memories.Every photographs depicts a memorable time spent in new found land, a new taste of culture and wisdom gained from what the eyes conceived.

As the saying goes, “Travelling leaves you speechless, then turns you into a storyteller “.

What’s your story about Regensburg?

What do you think of this city?

Until then,  let the turning of pages continues. I’ll see you in my next travel story about Regensburg!

7 thoughts on “Discovering the streets of Regensburg”