For our first feature on my new Blog section —Expat Mama around the World, Get to know one amazing Expat Mama from The Netherlands, Ann, the Blogger behind the Grubbs ‘n Critters  who shares her Expat Mama story about living in the land of beautiful canals, Van Gogh, delicious cheese, wind mills & clogs.

Ann currently lives in The Netherlands with his Dutch husband 2 kids and 2 cats. She’s a Baker, Innovator,  Homemade cooking enthusiast, a Globetrotter, and a serious coffee addict. 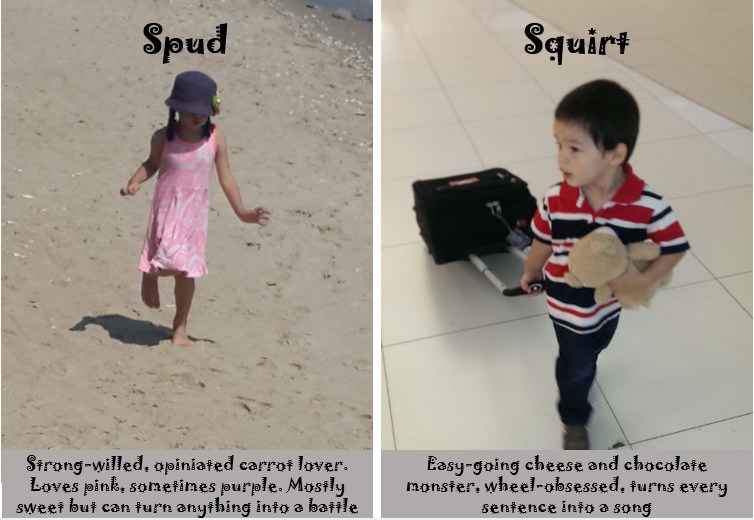 How does she manage to raise her kids in the cycling capital of the world?  Here’s my Interview- story  with her – “An Expat Mama journey to Motherhood in a foreign country.”

Tell us about your background .

I hail from a tiny island, with no capital city attached to its name as the entire city is actually a country called Singapore.  My parents are both Singaporean and still living in Singapore; my father of Javanese descent and my mother of Japanese –somewhat Portuguese lineage. Technically, that makes me a (Singaporean) mutt.

My career has been pretty much rooted in the advertising industry for 18 years now and after all these years, I still find it hard to explain what I really do! As a context, the industry I’m in deals with planning, negotiating and buying advertising space across all media. That was how I started out at the very bottom in the agency world. And there are so, so, so much more!

All these years, I have been lucky enough to not only work with global advertisers and partners across markets in my course of work, but also getting the opportunity to be transferred to another office in a different country with more than the occasional travels for business.11 years ago, that opportunity brought me to Bangkok, Thailand.

On Juggling work and Family times

I have since been a part-time SAHM after our move here. I still work supporting my Thai office as a consultant and I work remotely from home on a 3-day week schedule on Central European Time. That also means I have to do the occasional con-calls at 3 a.m or 5 a.m on my local time! For now, that’s only temporary and I’m excited on what lies ahead.

What are your Biggest Passions?

My biggest passions are cooking and baking. I just love being in the kitchen experimenting with ingredients and whipping up magic.  I find them to be therapeutic as no matter how tired I am especially when I am stressed out, my whole family would end up having a feast!

About a year ago, I collaborated with a blogger, Gen author of Eat, Play, Clove on a Monthly Mystery Munchies Project from South Africa.  It features every first Friday of the month where we both take turns to challenge each other on agreed theme or ingredients and then post up our creation for the month. We have now featured over 25 different recipes between the both of us and I must say that it has been one of the most amazing project with a fellow blogger ever!Check out one of my heavenly recipe for Fabulous Friday Flavour Here.

I also love to read, travel and watching movies but sadly, those were b.c (before kids) indulgence and I have yet to find time for them.These days, you’ll find me blogging away and I do get annoyed if I couldn’t find the time to blog!

How is it to live in the The Netherlands?

We’ve only been living in the Netherlands for 3+ months but really, the Netherlands is not a stranger to me at all.In the last 8 years, going back to the Netherlands for a vacation is an annual pilgrimage for at least 3 weeks at any one time. Our visit will always include family time with my husband’s side of the family and his bunch of childhood friends, who are by now, also my friends.

Family time and doing things together as a family comes first above anything else. A big part of my culture revolves around food – that’s huge from where I came from and we always make an occasion with food out of nothing! It’s also a blessing that my husband, his family and most of his friends are also enthusiastic foodies so we have a good blend of food culture going on whenever we get together.

On Dutch Bureaucracy and Formalities

In the last 3 months, I have been exposed to the complicated Dutch system of trying to get registered as a resident, getting insured, getting a mobile phone number in which I needed to produce a local bank statement for, trying to get a subsidy for getting the kids into the childcare to which we are entitled to, and recently the complex tax system – each of those probably need a post on its own!

On Dutch Early Education and Childcare

I have to say though that we have been lucky with school and childcare. Because we live in a little hole in the suburb, there has not been any waiting required. The situation would probably be different had we live in Amsterdam. The Dutch also has one of the highest quality education in the world that does not cost too much money and very much catered to the pace of the children.

Essentially, that been our primary reason for leaving Thailand where education system is crappy and was becoming expensive. In Singapore’s rat-race, education while affordable is extremely competitive and academic. Much of the education is rote learning and something that I am not too fond of.

On Dutch brutality for being straightforward & Directness

The concept of “losing face” that is prevalent in the Asian society and a culture I’m very familiar with is pretty much non-existent here. The Dutch is known for their straight in your face blunt honesty. What you see is what you get. No one cares about “face”. It is what it is and that works for me just fine.

If there’s one thing I find a little strange with the culture is that everyone calls everyone by name. A 4-year-old child would be calling the mother of the next door neighbor by the first name. Nephew and nieces would also address their uncles and aunties by name. It was something I had to get used to as back in Singapore, we would always address those who are older with “Uncle” or “Auntie” or Sister/Brother. Calling anyone by their first name especially when you are much, much younger is considered rude!

On learning the Dutch Language

I’m still struggling with the Dutch language and I must say that given the area where we live where Dutch is the language the community is most comfortable with, not being able to speak it fluently has been quite debilitating. It’s definitely something I have to work on; along with getting a bloody damn driving license!

On scenic landscapes and beauty of nature

I absolutely love the greenery, peace and quiet here.And do you know what else is great? The tulip season of course! It’s really the best time of the year to be visiting the Netherlands. Also, don’t forget to look up at the sky! You’ll be amazed with what you can see!

How is it being pregnant, giving birth and raising your child away from your home country. Or relocating with your kids to another country? What are the adjustments you’ve made?

Both my kids were born in Bangkok. From pregnancy to the birth itself and postpartum, we were pretty much on our own. My parents had to work and could only visit a few weeks after the birth of both of our kids and my in-laws visited us much later. In a way, we did not mind it very much as we wanted our space to figure things out on our own for the first few weeks after the birth.Fortunately, getting help in Thailand was relatively easy and we got ourselves a nanny in no time. Plus, the hospital services for birthing was nothing but excellent. I wrote a piece about my experience at The Bum.

Being a parent definitely required us to make some adjustments to our lifestyles. For the first few years, we no longer slept beyond 9 p.m. and we could no longer sleep in till late afternoon.  And once I started going back to work after my maternity, I found it hard to juggle and get the work-life balance I needed. Harder for me as I was a workaholic and I was travelling lots for work!

But somehow, we managed to work things out in the end. With the move from Bangkok to the Netherlands. I guess I just went with the flow and tweak things as they go along. I’ve learnt that not having any expectations is the best solution to keep your sanity.

What is your say about raising your kid as a third culture kid?

Now that we are settling in my husband’s birth country, I’m not sure the term third culture kids would apply to them!Still, having spent the earlier part of their formative years outside of their parents’ culture, I guess by birth they’ve got third culture ingrained in their DNA. Besides, I reckon it would only be a matter of time before we get itchy butt again to move to another country – perhaps in another 10 years.

Much can be said on the benefits of raising a third culture kid. I see it as raising not only a child, but a citizen of the world who fully embraces cultural diversity and respecting the differences across cultures. The exposure and experiences they have had would help them to not only expand, but open up their minds, learn the art of adaptability as they intuitively learn to be more sensitive to their surroundings.

They are already brought up in a multi-cultural family and we have tons of fun creating our very own family culture, traditions and customs altogether and then mix them up as they deem fit without even thinking about it. Not many (non-third culture) kids would have that kind of exposure!

Wherever they are in the world and whichever part of the world they may end up in, they would be rooted to the family values instilled in them and they’ll take it with them wherever they go.

How do you make an impact as an Expat Mama in The Netherlands?

I used to join mommy clubs and playgroups when I was living in Bangkok. It really helps to get to know other expat moms in the community. One of my favorite meet-ups was the Baby Wearing Club. That was pretty awesome!I have yet to start on anything Mommy-based in the Netherlands! It’s something I need to work on.

Thank you so much Ann for sharing your wonderful share about being an Expat Mama. If you want to know more about Ann and her passionate cooking, check her sumptous Grubbecipes and her fabulous  Critterstories.

Photos used in this post is courtesy of Ann of Grubbsncritters and is of personal property and may subject to copyright. Should you wish to use it, please mention her.

Are you an Expat Mama? Your story can be featured here too. Just drop me an email @ justbluedutch@gmail.com and follow our Expat Mama around the world stories in my Twitter Page Here .

14 thoughts on “Expat-Mama in The Netherlands”