In my previous post 10 Surprising Things about Parenthood in Kuwait, I wrote about fascinating things that caught me by surprise as an Expat parent living in Kuwait. I found so many differences in child rearing in Arab countries as well as in Netherlands compared to how I was raised in the Philippines. It’s not the same  when you are a parent in your home country with your own native culture than becoming an Expat parent in another country with totally contrasting cultural  & child upbringing values. I become a parent and gave birth to my daughter in Kuwait so I don’t have a personal experience how to rear a child in Ph, but these things are based on how I saw my nieces, nephews, and how I viewed childcare during  my childhood. So much changes since then.

So here I want to share with you my humble views about Parenthood in the Philippines since this has become an interesting subject for me when I became a parent. Being born & raised there , my observations were from my personal experiences and the way I see the Filipino way of parenting against Global Parenthood. On the other hand, I am not putting into generalization of everything since parenting is pure hands-on & personal.

It differs from one person to another . You as the parent knows what is best for your child.

Philippines in general have the  impression of a child-Friendly country. If you google about it, you will see faces of smiling faces of children, wacky as it may seem but children are important part of the society. It is a typical sight that children are seen in every occasion, in almost every social activities and being regarded with respect and protection. You can see Filipina mothers with their young babies out in the night shopping, in the church, in the wet markets buying fish,playing in the rice fields, brought to workplaces, parties or just tagged along doing errands. There is no such thing as off-limits zone for Children. 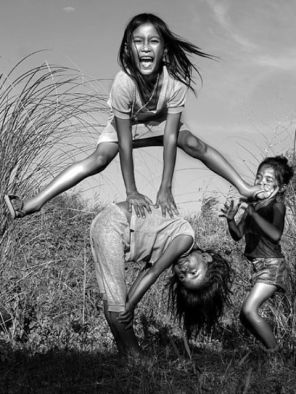 Recently ,the Philippines has achieved much in complying to the principles of UNCRC  or (United Nations Convention on the Rights of the Child ) over the past 25 years. But in the next quarter century,they strive for the whole nation to have more caring community where children do not experience discrimination, but the warmth of a community so willing to embrace and protect them.

2.On Embracing the trend in Young Parenthood  & High Birth Rate

Philippines stands high at #59 ranking for Birth Rate  with 24.27 Births /1,000 population and Filipina women have a High Fertility rate of 2.6 (#67) , Compared to Netherlands which is 1.7 child per woman (#152)  or with Germany which has 1.4 (#186)  only. This really surprised me. Numbers really shows you the fine line between facts and just pure hypes. Numbers don’t lie.

To view the whole article for Fertility Rate per country as per 2015 stats, click Here.

It is  common to see Filipino women to have children at a very young age. Teenage pregnancy have become an accepted norm , It is a taboo subject that causes raised eyebrows and yet mainly because there is not enough education about Sex, Birth control & use of contraceptives. It’s depressing to see young women getting pregnant and becoming mothers at the age of 15-19.

I became a mother myself when I gave birth to my daughter at the age of 37. Yeah, too late maybe.

Although the Catholic church is very involved in this issue it shows that its unsuccessful. This trend has a direct impact on the quality of parenthood for Filipinos. Young Filipina mothers faced difficulties in raising a child due to lack of maturity and knowledge about having a child. There is a big change in one’s moral  and character once you’ve got responsibilities  that come too early for you to handle. Oftentimes,it is the child who suffers.

3. On Growing up in Big Families

Filipinos are very  clanish.They tend to live closer to their relatives. I don’t know how this started but I grew up seeing this type of living arrangement. Filipinos have an average of 3-5 children and having a big family is commonly seen as status. Children are raised up not only by their parents but with the whole clan .They grow up being taken care of by their Grandparents, Aunties ,or Uncles and up to their distant cousins. It’s no wonder that the stress of Cleaving and Independency upon growing up is not regarded as strongly as in the US or in Europe. At an early stage of rearing a child, Filipino parents exposed their child knowing that they always have someone to depend on or will take care of them if both of the parents are unavailable. This is maybe  the reason why most Filipinos live together with their parents even when they already have their own families. In a way this is an advantage when you’re a working Mom, you can always count on Grandma to look after the kids if you don’t have a maid. I observed that this is totally non-existent in Europe or in US where Independency  upon reaching  18/21 of age  is a norm. Maybe there is, but it’s not as common as in Ph. In Philippines, It has been an  accepted weakness to ask for help , to rely on immediate support & help from other members of the family.

This manner of  raising a child have become an integral support system for  Filipino parents. On its positive side, Mothers get the help that she need in child care right away , almost behind her doorstep. It’s very normal that babies are used to seeing their  siblings and relatives ,  therefore Separation Anxiety is easily overcome  as early as toddler’s stage. They don’t have a difficult time adjusting to the surroundings of a Nanny,in a Daycare or Nursery school. Having a hired help ( maid or Nanny ) to take care of the children is not that prevalent although its a personal choice, but this can be seen now mostly on middle-class & well-off families.

4.Filipino parents are totally Hands-on and Attached in raising a child

What i found so common in Filipino parenting is that they are totally hands-on and attached (physically & literally ) to their child. I have observed that Filipina mothers are known to be good homemakers and caring for their child. Maybe this is the reason why many Filipinas who worked abroad as a Nanny  have a distinct reputation of being excellent in raising kids.

Extended Breastfeeding, Babywearing, & Co-Sleeping are among the child rearing values that is so typical for Filipinos. Although many people have raised their different opinions about Co-Sleeping, it has become a trademark of Filipino families. A baby sleeps in the same room with the parents and most of the time, sleeps on the same bed too. I wonder many times how Filipino couples handles the private and intimate moments with a baby in the same room. This way of living  sometimes happens  because of lack of space in the house (separate room for baby ), for convenience reasons, or they just love to be close physically with their child. As for me, my daughter sleeps alone  in her room from the time we brought her home from the hospital. This is a personal choice that we have made.

Filipino parents love to carry their child in their arms. The use of strollers is mainly on long stays outside, out-of-town trips or travelling out of the country. One reason  because Philippines has a poor public transport system and its a hassle for parents to carry along a stroller during commute. There’s no such thing as bus or train that is stroller friendly. Besides of its high cost, this has become a dispensable luxury to most average families. For practical reasons, Filipinos are known to be open-minded about accepting second-hand or giveaway hand down items. It’s normal to reuse cribs or baby walkers that has been previously used by child of  relatives or friends.High chairs or swings are not as in demand as it is here or in Europe.  You can see Filipino parents carrying their child everywhere outside, walking in the street, attending events, or even in crowded places. The early habits such as Eating with utensils & Potty training are taught on early stages of child development.

Philippines is a Catholic country and one imperative is for a child to be Baptized into Catholic church if both parents are Catholic. This occasion is celebrated with big party (more like a feast ) with roasted pig (Lechon ) and inviting almost all their relatives & friends . Everyone is involved in this family celebration. The child has 5 sets  at least of  Godparents ( or Ninongs & Ninangs ) .  Birthday parties are big thing and it  become a trend in Philippines to throw big parties for their child . Mainly because they have relatives & immediate families living close by to share it.

Parenthood in the Philippines involves exposing your child to Poverty, Death & calamities. I remember as a child the memories of the  strong typhoon that badly hit our region and that our house was wrecked . Later we got used to it that natural disasters has become a part of our childhood. We celebrated Christmas with half of our roof is not yet repaired. Raising a child with their eyes open to see life’s difficulties can be challenging for Filipino parents. Children are brought to funerals and participate in the grieving times for a loss of a loved-ones. Nothing is disclosed from them.

Filipino parents instilled these thoughts on their child on early stages of life and explaining to them that life can be painful, hard, and at the same time offering strong moral support for their children. Because of this, Filipino children eventually learns the values of hard work.

Do you have any opinion about how a child being raised in your own country? How does this post made you feel?

Would you ever raise a child in Philippines? if given a chance?

I hope I brought you some awareness of how parenthood in the Philippines is greatly connected to its culture . If you like this post, please feel free to read on further on my articles about the Surprising things about Parenthood that I saw in Kuwait and raising the early months of my daughter there and raising her as a TCK (Third Culture Kid ).